Take notice that the Regular Meeting of City Council of the City of Uniontown for July will be held Thursday, September 2, 2021 at 4:30 PM in City Council Chambers, City Hall, 20 N. Gallatin Ave., Uniontown, and will be open to the public for in-person attendance.  The regular stated meeting of Council shall be open to the public for the remainder of 2021 unless CDC guidelines for social distancing and the state mandate for the size of gatherings is reinstated.

The meeting agenda can be found on the City of Uniontown website at uniontowncity.com, and also posted on the front and back door of City Hall.

The Mayor’s office, and the City Council members are requesting the presence of it’s citizenry as our City and County commemorate the tragic attack on our country on September 11, 2001. It is our hope that young and old will join together at Storey Square as one, as we remember that fateful day, the sacrifices made, and the patriotism that stirred our souls.Won’t you join us? Please plan on coming together on September 11, 2021 at 2pm. 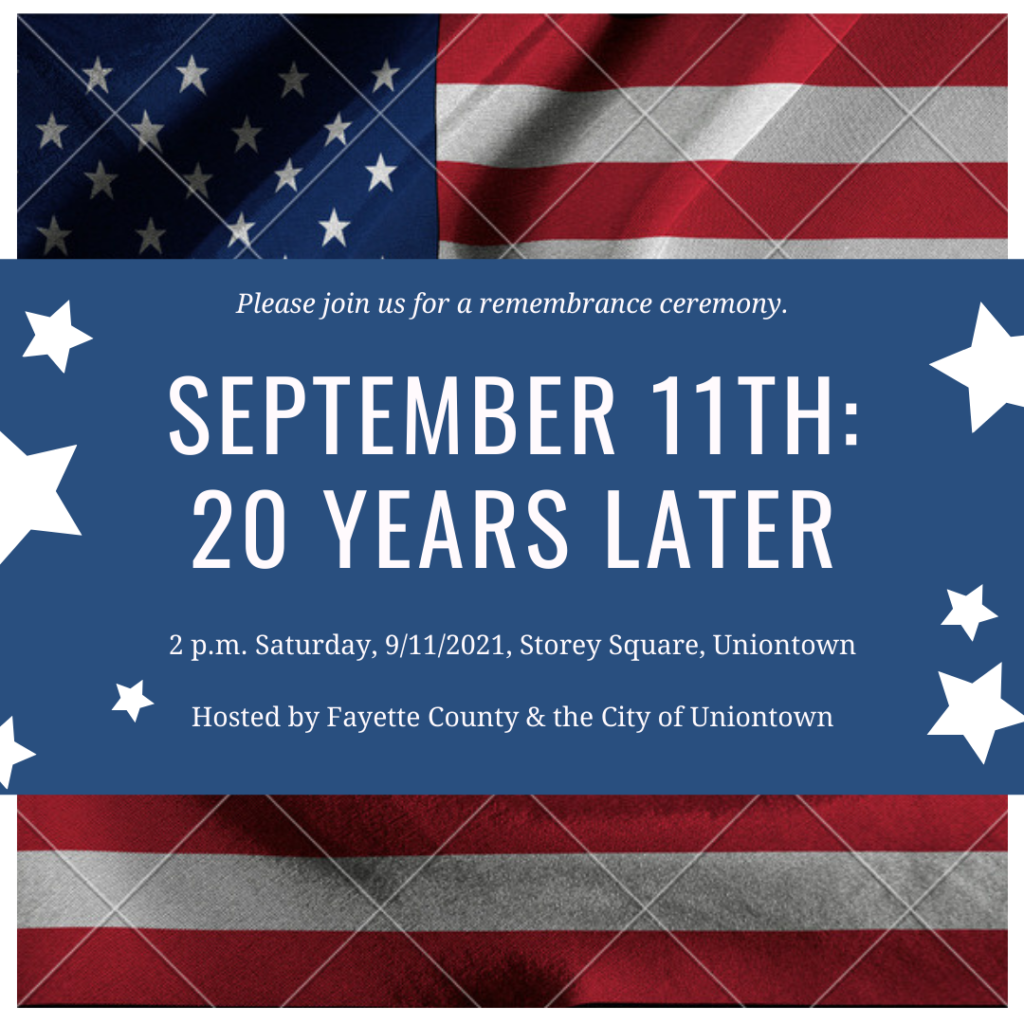 Uniontown, PA – All 18 flags are proudly waving once again at Uniontown’s George C. Marshall Memorial Plaza, thanks to a generous donation.
City of Uniontown officials, along with the Fayette County Veterans Affairs Office, Uniontown’s Rolling Thunder Chapter 5 and other veterans came together Thursday afternoon for a flag replacement ceremony at the plaza, sponsored by the Silvis Group, Inc. and Online Stores LLC.
Located at the site locally known as “Five Corners” along West Main Street, the plaza has long been a beloved attraction for county residents and visitors alike. It stands as a testament to the life and accomplishments of Uniontown native and U.S. Army General George C. Marshall.
On June 19, the plaza was vandalized, with flags from the 17 nations who were part of The Marshall Plan, also known as The European Recovery Plan, following World War II, along with the Pennsylvania state flag, being cut down and stolen. Our United States and Prisoner of War/Missing in Action (POW/MIA) flags were left untouched.
Uniontown Mayor Bill Gerke said the vandalism was “very disappointing” and “struck at the heart of one of our beautiful, historic tributes.”
“There has been an outpouring of concern from citizens, businesses and organizations near and far to help replace the flags. Thank you, Silvis Group and Online Stores, for your thoughtfulness and generosity in helping Uniontown restore the flags to Marshall Plaza,” Gerke said. “With a gray cloud, there is always a silver lining. Silvis Group and Online Stores are the silver lining to this unfortunate occurrence. Everyone associated with the Marshall Plaza wants to say a big ‘thank you’ to you.”
Not long after the unprecedented vandalism occurred, Cathy Fligger, executive assistant with Silvis Group contacted the city on behalf of Silvis President Jacob H. Silvis IV; Silvis General Manager Chris Boucher; and Eric Nonneberg, director of sales and product development for Online Stores LLC.
Together, Silvis and Online Stores donated a full set of replacement flags representing Pennsylvania, along with the nations of Austria, Belgium, Denmark, France, Germany, Greece, Iceland, Ireland, Italy, Luxembourg, Netherlands, Norway, Portugal, Sweden, Switzerland, Turkey and the United Kingdom.
The organizations also donated new U.S. and POW/MIA flags, to allow the existing flags to be retired; as well as new ropes for all that were severed during the theft.
President Jacob Silvis said he learned of the vandalism from the news and, after taking his wife’s advice and “sleeping on it,” he presented the donation idea to his team before contacting their vendor, Online Stores, to talk about a partnership.

“We all agreed that we have the ability to make a difference where it was much needed. We have a wonderful relationship with Online Stores and appreciate them stepping up to the plate when asked,” Silvis said. “For the last 36 years, Silvis Group has focused on being committed to the western Pennsylvania region and seeing this really hits close to home. We have an office in the Uniontown area and we want to make sure that we are supporting the community that we work and live in. It’s a testament to the American spirit that someone can tear us down, and together we can build it back up.”
Nonneberg said Online Stores was eager to help upon learning of the vandalism, as the company owns and operates the largest online supplier of flags and flagpoles in the country.
“It just seemed like the perfect time to do the right thing and help out a local community that isn’t far from our corporate office in New Stanton, Pennsylvania,” Nonneberg said. “We work with thousands of VFWs, American Legions and all types of veterans’ groups across the country, so this was a no-brainer when it came to helping a community in our own backyard. It’s hard to believe that someone would sink so low as to steal all of these flags, but we are glad that we could help in some way.”
Thursday’s ceremony featured speeches from all key players, as well as a presentation of the new flags from to the city and a ceremonial flag raising.
Fayette County Veteran Affairs Director Brian Bensen said replacing the flags shows “our resilience and respect” for the memorial.
“It’s also a reminder to the county that we care about our veterans, their memorials and their sacrifice for us and our way of life. The allied flags are a reminder that, under the worst times and against all odds, we came together as a nation and a world to defeat evil and protect our freedom,” Bensen said. “We put aside our differences and joined a united front – the same way Fayette County did when our memorial was damaged. We came together. The overwhelming outpouring of support proves this.”
Following the vandalism, monetary donations began pouring in from concerned citizens countywide. That money will be used to create a fund exclusively for the city’s future flag replacement purchases, helping to defer a nearly $2,000 annual cost to the city.
Mayor Gerke said Thursday was a “very special day in the life of the City of Uniontown.”
“One of the first things you see when entering Uniontown from the west is the flag display at George C. Marshall Memorial Plaza,” Gerke said. “The plaza denotes a very important piece of United States history that our city played a large role in. This symbol of history needs to be honored for generations.”
Silvis Group, Inc. of Mt. Pleasant is a full-service landscaping company specializing in design, building and maintenance in western Pennsylvania and surrounding states. For more information, visit www.silvislandscape.com.
Online Stores LLC of New Stanton is a privately owned company founded in 2002 and specializing in flags, flagpoles and accessories nationwide. For more information, visit www.united-states-flag.com.
To learn more about the Fayette County Veteran Affairs Office, visit www.fayettecountypa.org. To learn more about the City of Uniontown, visit www.uniontowncity.com.
-XXXXX-
For more information, contact Laura Kutek, City of Uniontown Director of Planning & Community Relations, at 724- 430-2934 or lkutek@uniontowncity.com. 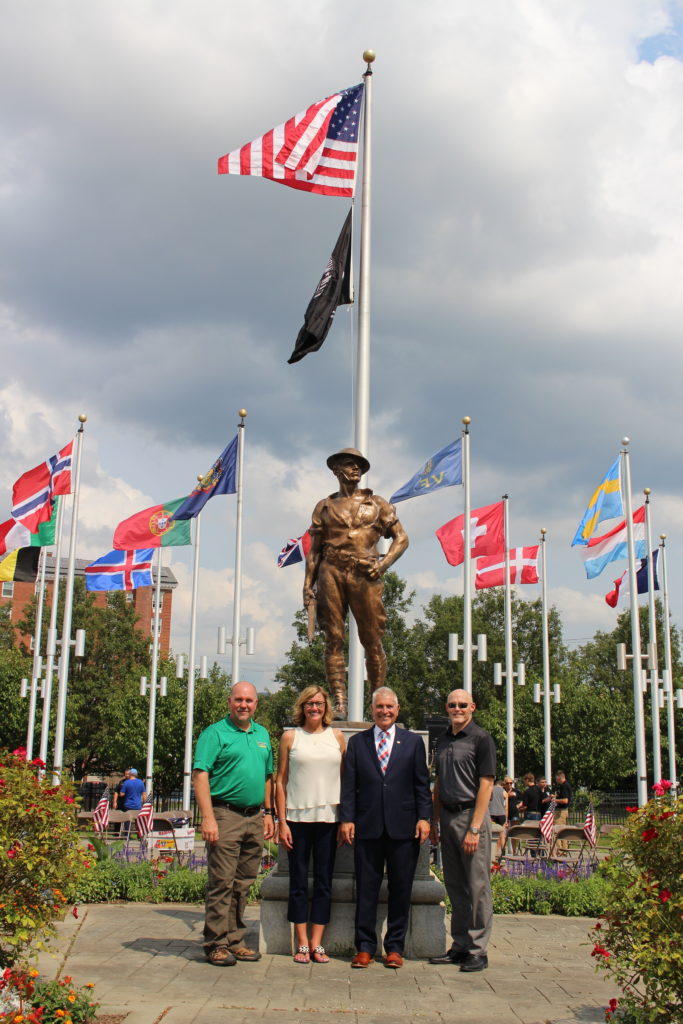 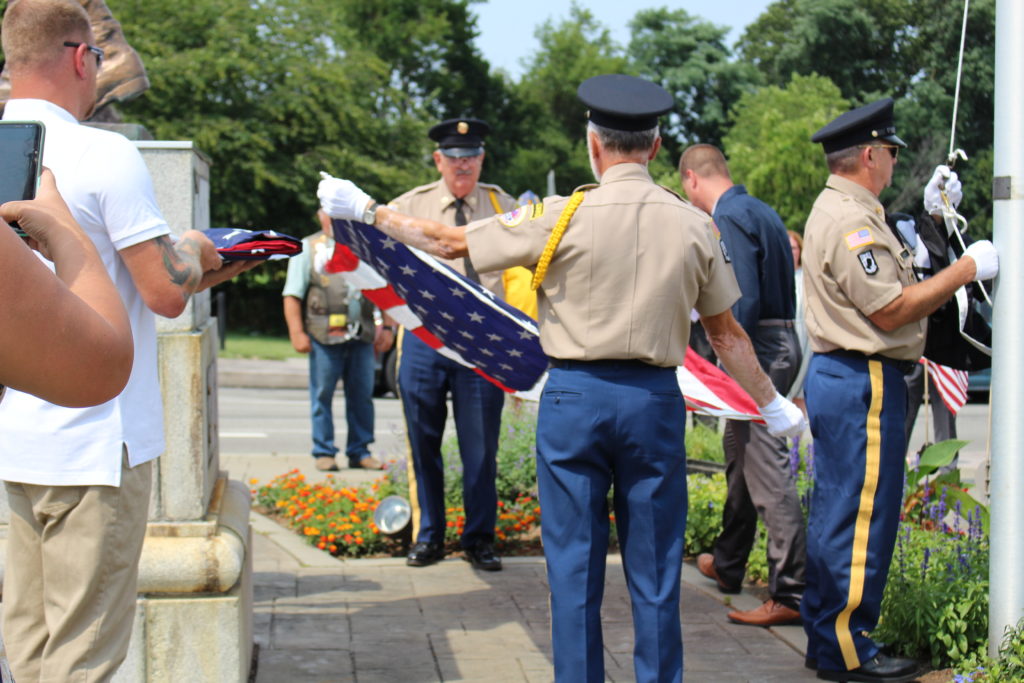 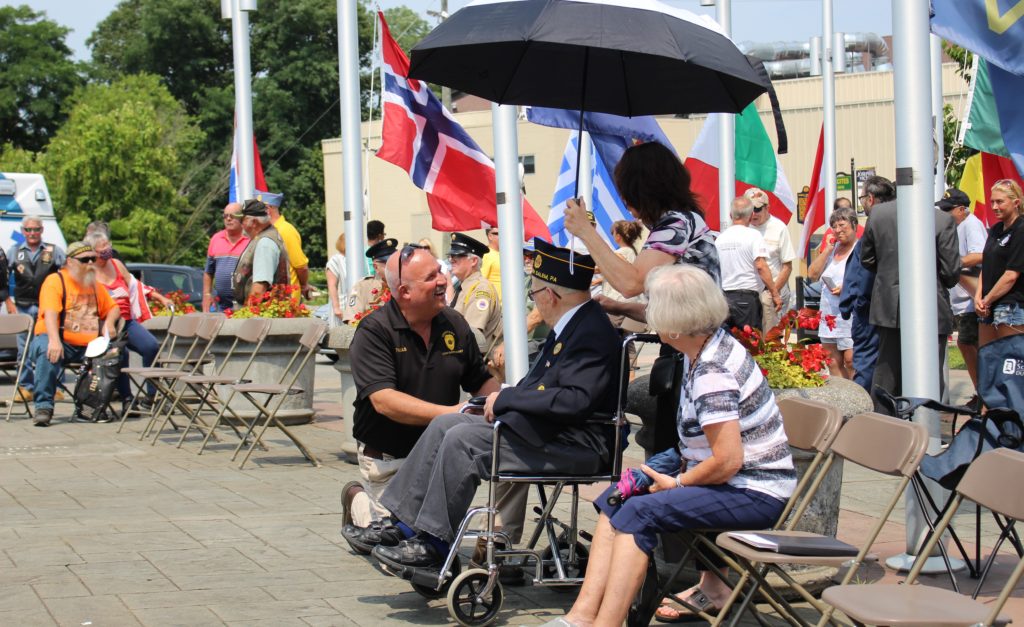 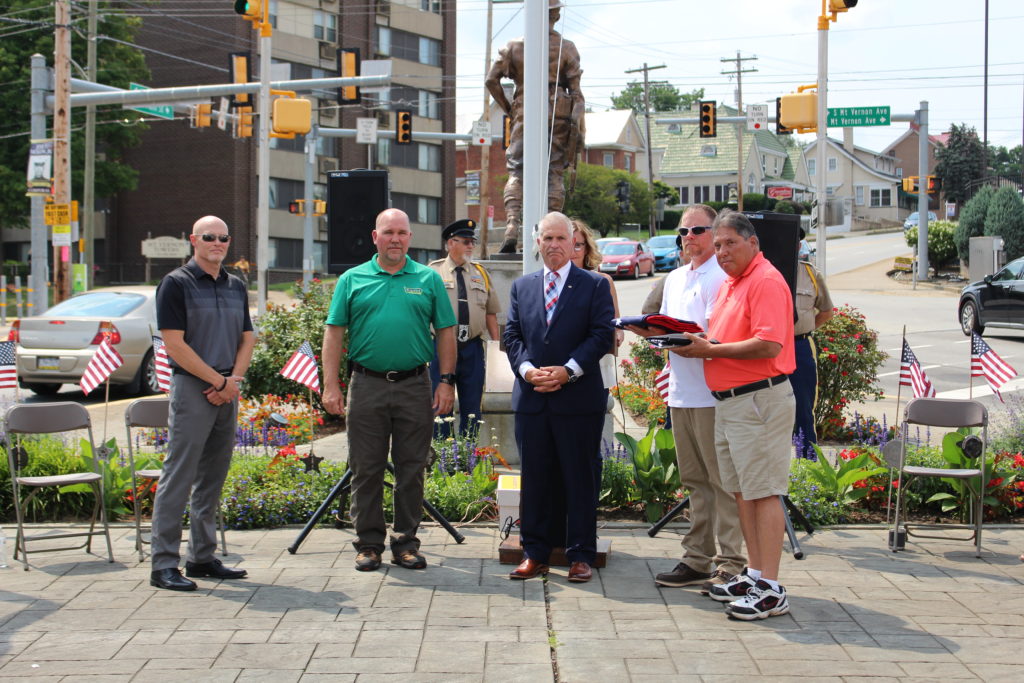 The City of Uniontown, Fayette County, Pennsylvania, is inviting firms to submit a proposal for investment management and custody for the Police and Fire pension investment funds it maintains with approximately $18 million in assets.

Copies of the RFP including information relating to submitting a proposal and specific requirements are available from Helen Bardos at hbardos@rhoadeslawllc.com or 7247097697.

The City reserves the right to request additional information from any and all respondents, to waive any defect or abnormality, to award or not award all or any portion of the work described herein, to issue modifications to the RFP or otherwise to move forward in the best interest of the City.

Take notice that the City of Uniontown is now accepting sealed bids for the sale of the following vehicles that are out of service:  1996 Ford Super Duty Diesel Tool Truck,

City of Uniontown Rules of Conduct

Notice is  given that the City has amended the Citizen Participation Plan (CPP) to reflect recent guidance indicating how to conduct proper citizen participation in the event of an emergency. Copies of the draft CPP will be on public display on the City Uniontown’s website uniontowncity.com for a period of five (5) days.  It is anticipated that Council will adopt the Citizen Participation Plan at its scheduled meeting on Thursday, June 4, 2020 at 4:00 pm.

For any questions or concerns, you may call City Hall at 724-430-2900 or email kmarshall@uniontowncity.com. 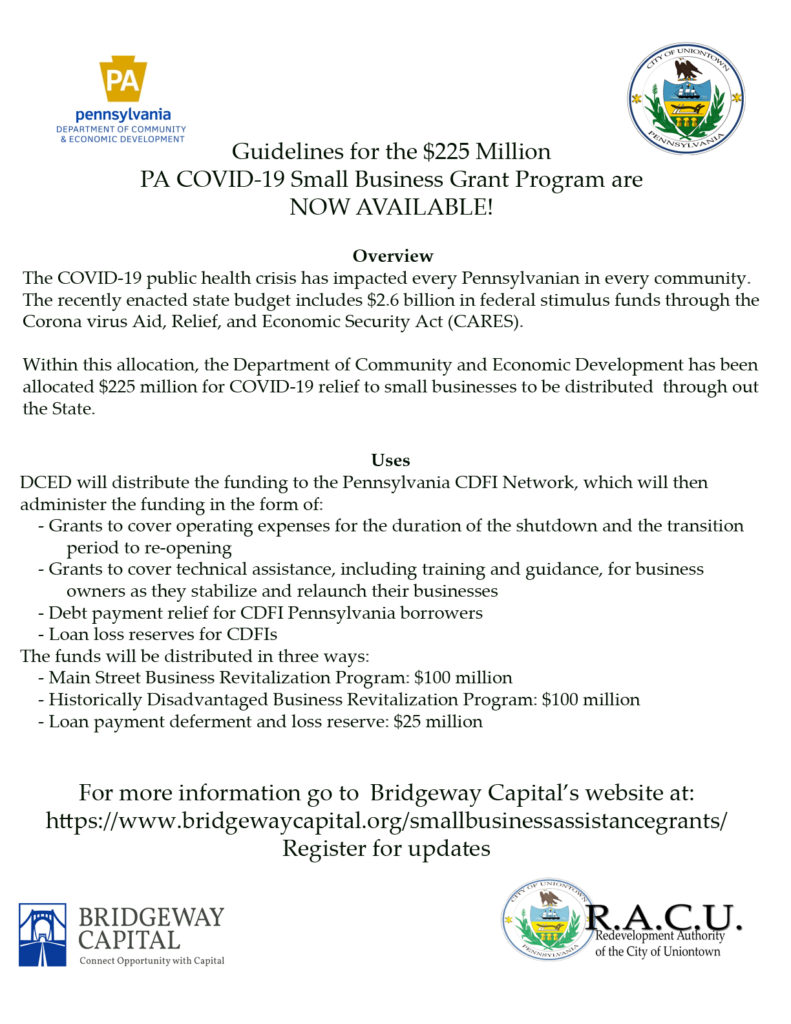 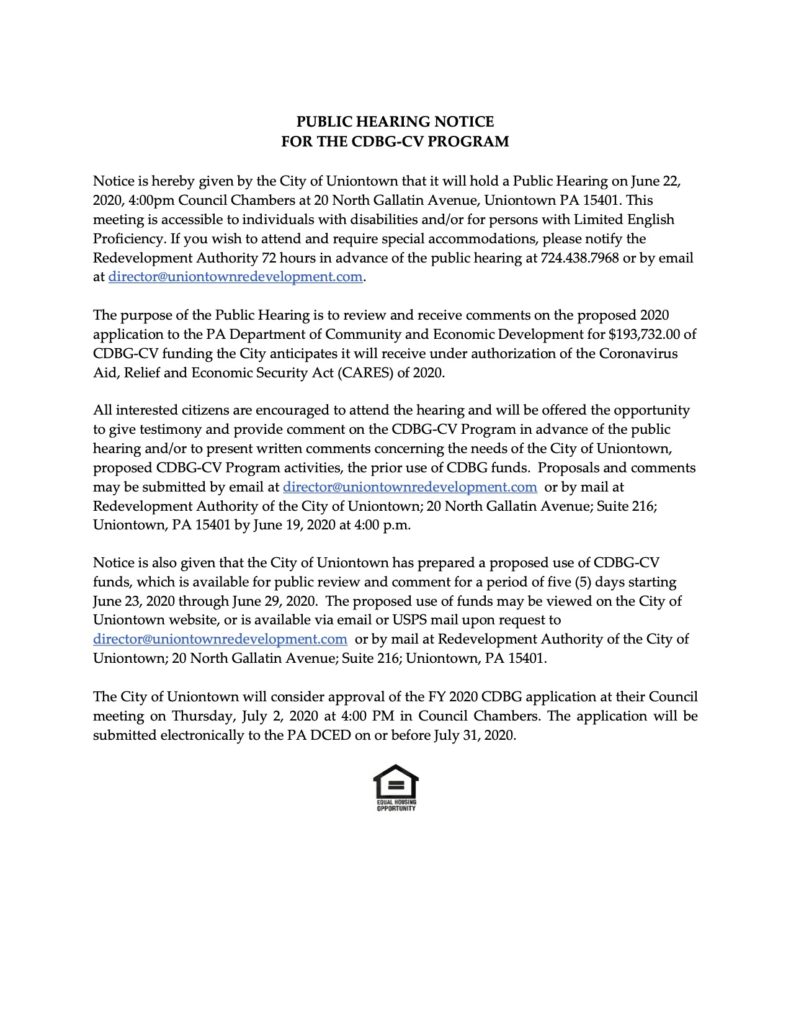 Popularly known as "Beesontown", the "town of Union" was founded by Henry Beeson on July 4, 1776, coincidentally the same date the United States Declaration of Independence was ratified. The National Road, also known as the Cumberland Road, was routed through Uniontown in the early 19th century, and the town grew along with the road (now US 40). 10 miles (16 km) southeast of Uniontown is Fort Necessity, built by George Washington during the French and Indian War (part of the international Seven Years' War) as well as the site of theBattle of Jumonville Glen, where the North American branch of the war began.

Uniontown's role in the Underground Railroad in the antebellum years is commemorated by a marker on the corner of East Main Street and Baker Alley. Residents helped slaves escaping from the South to freedom.

In the late nineteenth century, the town grew based on the development of coal mines and the steel industry. Uniontown was the site of violent clashes between striking coal miners and guards at the local coke works during the bituminous coal miners' strike of 1894. Fifteen guards armed with carbines and machine guns held off an attack by 1,500 strikers, killing five and wounding eight.

The Columbia Rolling Mill, an iron and steel works, was located in Uniontown from 1887 to 1895. The mill was the town's top industry at that time. During the Coal Boom of the early part of the 20th century, Uniontown was home to at least 13 millionaires, the most (per capita) of any city in the United States. "Coal barons" and Carl Laemmle, the president of Universal Films, sponsored the famous Uniontown Speedway board track from 1916 to 1922. It was a mile and a quarter raceway.

As with most of Western Pennsylvania, Uniontown's economy waned during the region's deindustrialization of the late 20th century, when the steel industry restructured and many jobs went elsewhere, including offshore. This decline continued into the 21st century, and the population is about half its peak of 1940.

The USS Uniontown (PF-65), a Tacoma-class frigate, was named for the city by the United States Navy on August 16, 1944, the only ship to be so named.

In 1967 Uniontown was the birthplace of the McDonald's Big Mac sandwich. In 2007 the Big Mac Museum was opened in North Huntingdon Township in Westmoreland County, to the disappointment of some Uniontown residents. According to a McDonald's spokesperson, the decision was based on logistics and access, but Uniontown residents complained in an article that was published in the Herald-Standard. 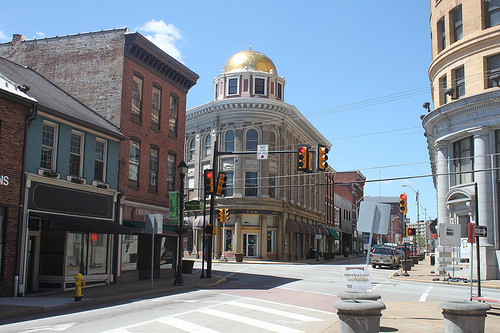